*Some images shown with the optional Carbon Airbox Lid

The BMW E9X M3 Eventuri intake system is the result of extensive research and optimisation which improves possibly one of the best designed stock intake systems we have seen. The E9X stock airbox system is a brilliantly designed intake with an excellent flow path and feed system for ambient air. However on closer inspection, there are restrictions in the inlet tube connecting the airbox to the inlet manifold. By redesigning the tube yet maintaining the airbox, we have been able to allow the V8 engine to breathe with greater efficiency and therefore gain power. In addition to the new tube design, we also identified a further restriction in the air feed system. To overcome this we designed a scoop to allow an increase in airflow through the airbox. This reduces inlet temperature values further and adds to the performance gain of the system.

Dyno tests were carried out showing a consistent gain of approximately 9hp and 11ft-lb of torque. The gain is not just at the peak but throughout the RPM range. This translates on the road to increased part throttle and full throttle response with the car pulling much more eagerly to the redline. The testing was done on the same day back-to-back and temperatures were monitored to ensure consistency. The car was tested firstly with the stock intake - hood closed. We then left the car on the dyno and installed the Eventuri. The car was then run again - hood closed. Several runs were carried out with both configurations to get a consistent result.

The system was also tested using a road based measurement device (Insoric). On the road, the airflow is a lot better than the fan can achieve on the dyno and so the intake system is able to perform better. The following graph shows the difference the Eventuri intake makes on the road compared with the stock airbox. The measured gains were 16Hp and 14Nm : Solid lines show with the Eventuri and dashed lines are with stock airbox. Red line is power at the crank and blue line is at the wheels. 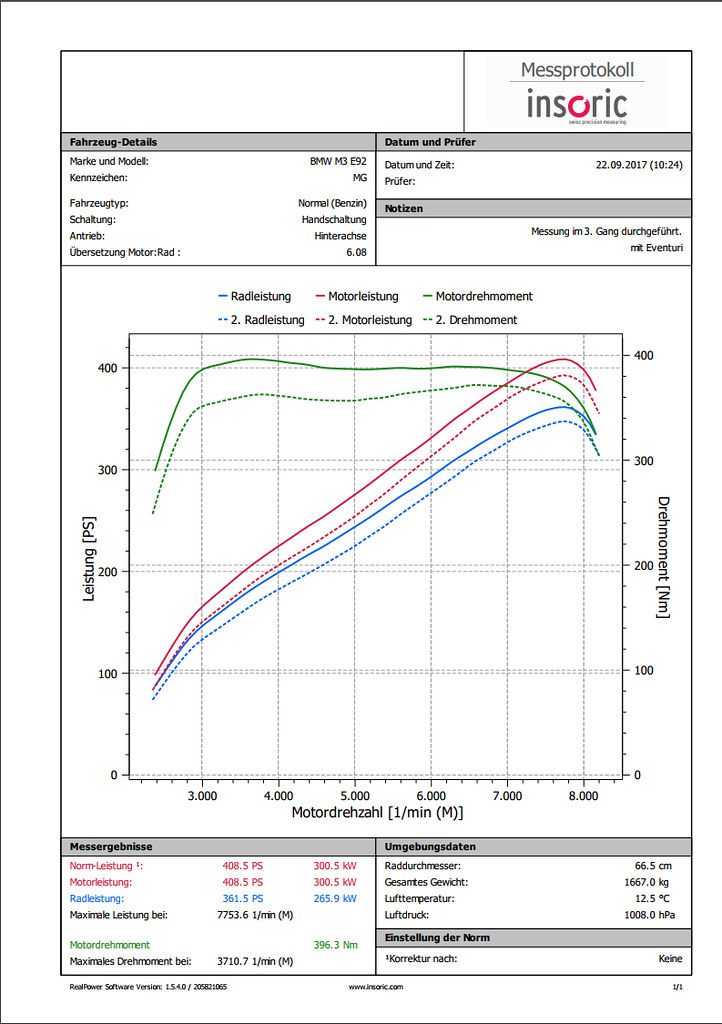 To monitor and record data output from the ECU we used a Bavarian Technic diagnostics tool. The car was fitted with the stock system and then data was logged in 4th gear to the redline. Then the Eventuri intake was fitted and the same method applied. The outputs show that the air mass flow with the Eventuri is higher across the entire RPM range - with a bigger difference at higher RPM where the restrictions in the stock system become more apparent. Furthermore the difference between the ambient temperature and the inlet air temperature (IAT) is also smaller with the Eventuri due to the scoop enabling a higher air speed through the airbox. Here are 2 screenshots of the data output, one at approximately 5000rpm and the other at approximately 8300rpm.

The Interactive graph can be seen HERE

Finally we took the car for some road testing using a Vbox unit to record the acceleration from 60-130mph (also 100-200Km/h). For the Vbox testing our test car had a primary decat and stage 2 tune for all test runs. Testing was carried out on the same stretch of road - again on the same day to keep variables minimum. Results show that with just the intake added, the acceleration times from 60-130mph and also 100-200Km/h reduced by approximately 0.3 seconds which is a significant change at such speeds. 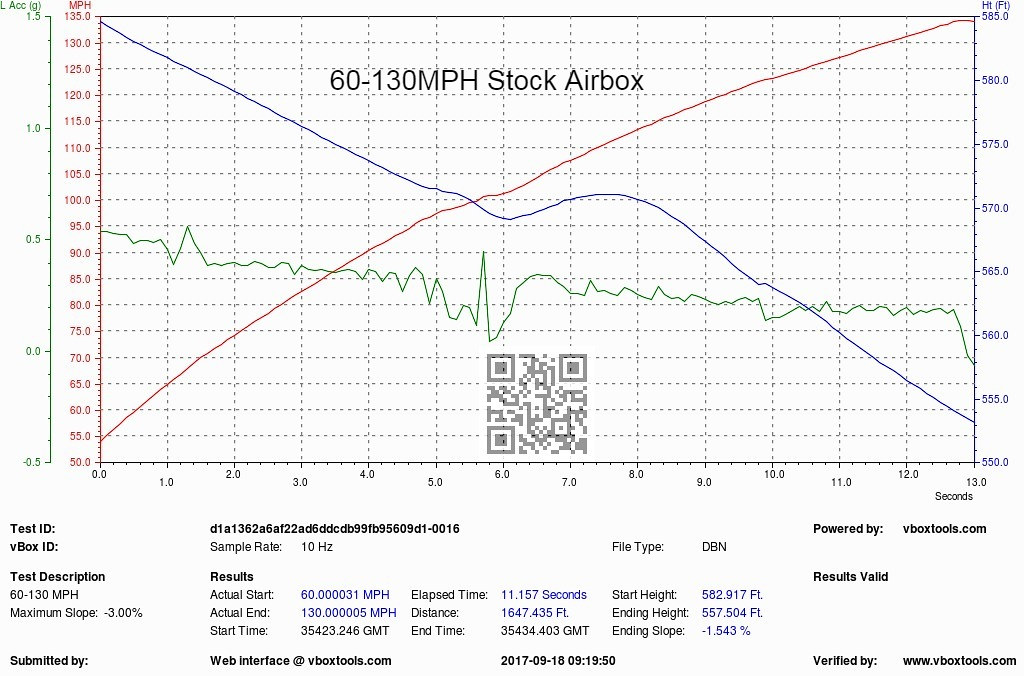 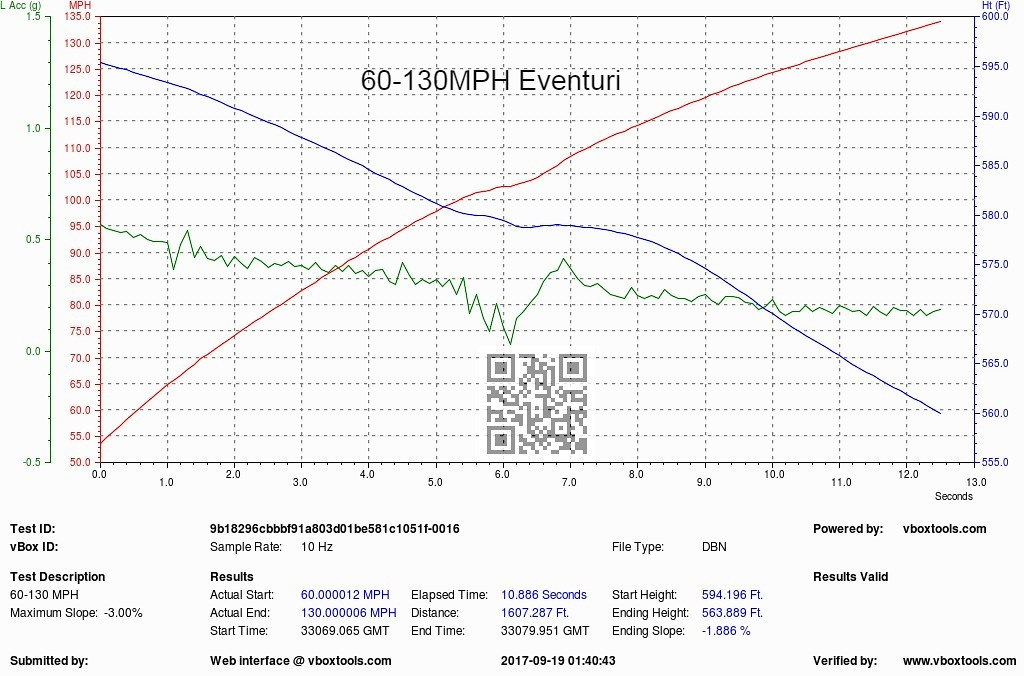 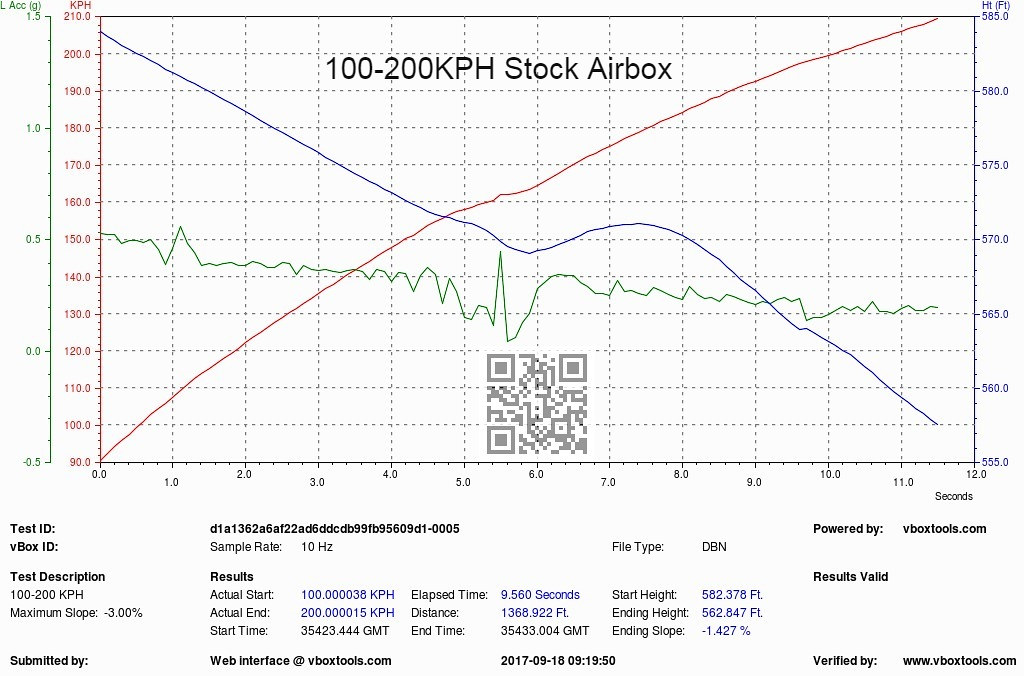 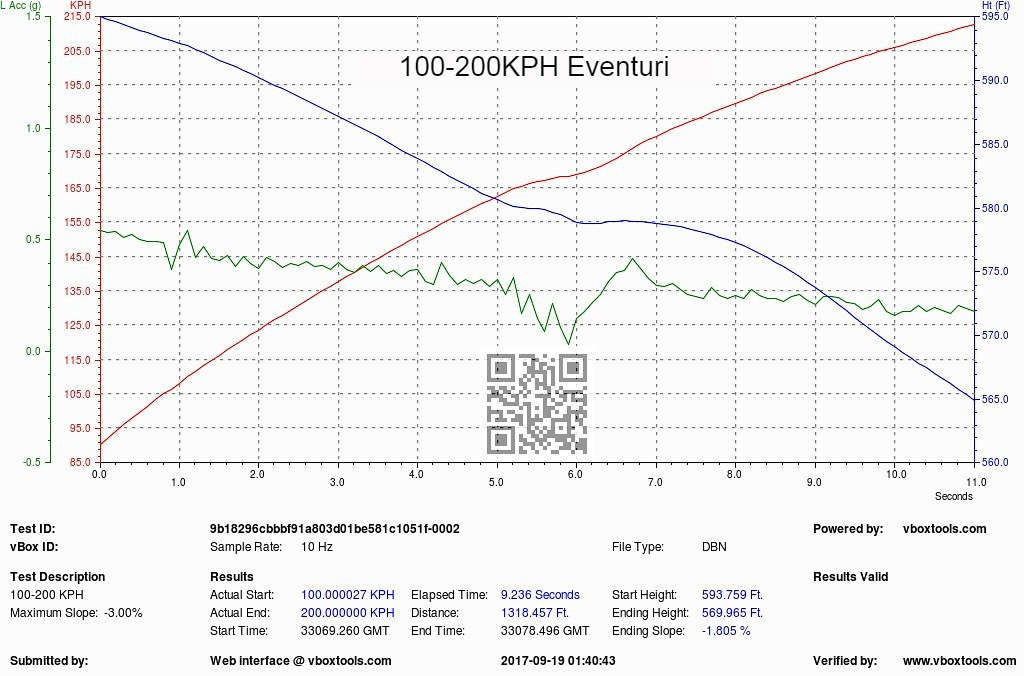 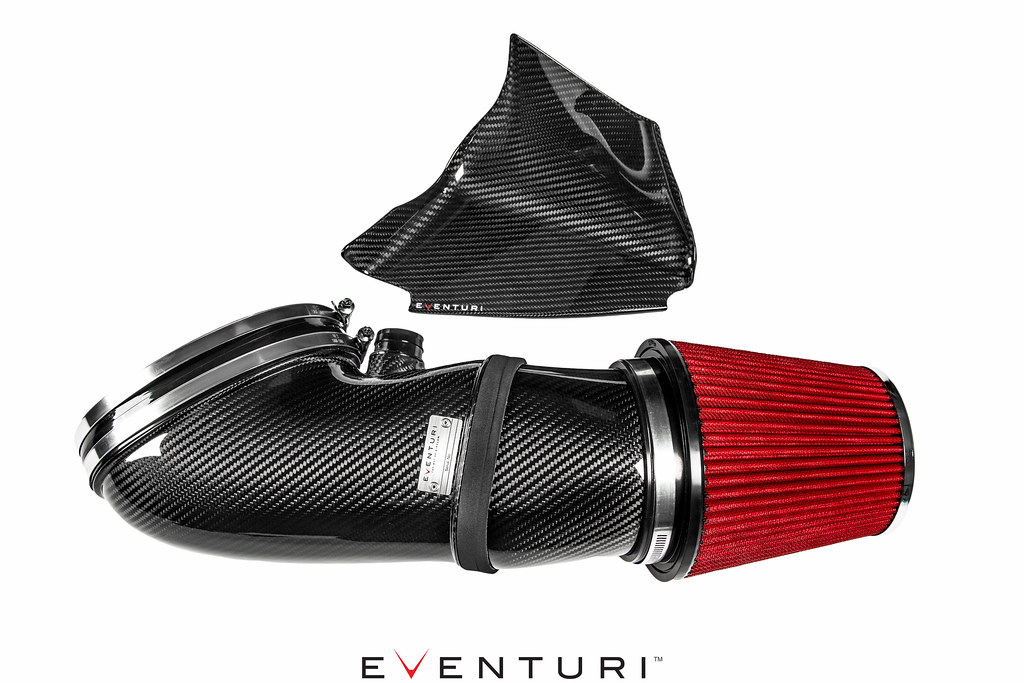 The Eventuri E9X M3 intake system consists of a number of components engineered to perform a specific purpose and fabricated to the highest of standards. Here are the details for each component and the design ethos behind them:

In order to appreciate the improvement in the design we must take a closer look at the stock system: 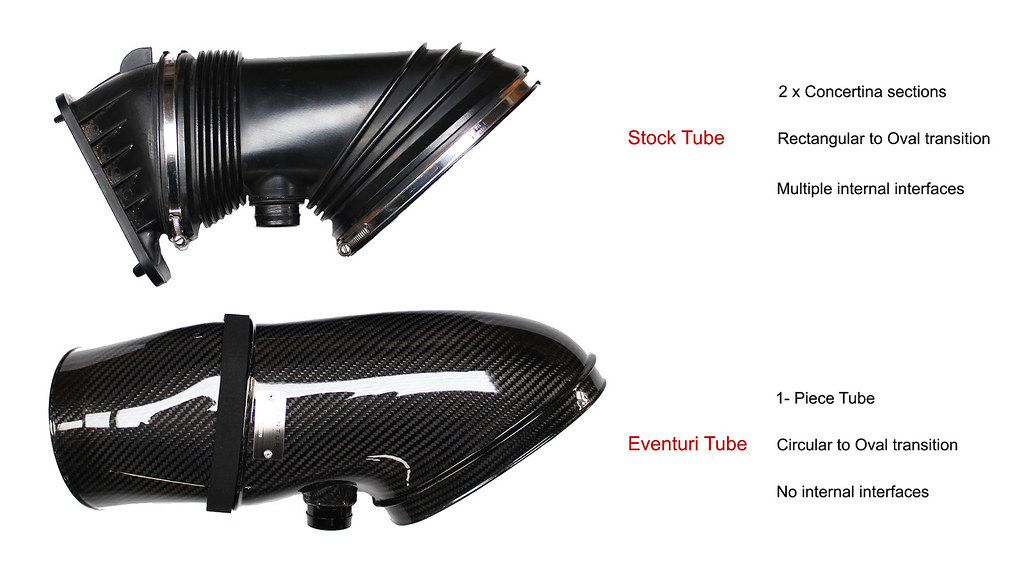 As can be seen - the stock intake tube has 2 concertina sections which are used to allow the tube some flexibility for engine movement. These sections introduce multiple internal interfaces to the oncoming airflow which results in turbulence and therefore a less efficient path for performance. The Eventuri tube on the other hand has zero internal interfaces and so airflow is allowed to stay laminar which allows the engine to breathe more efficiently. 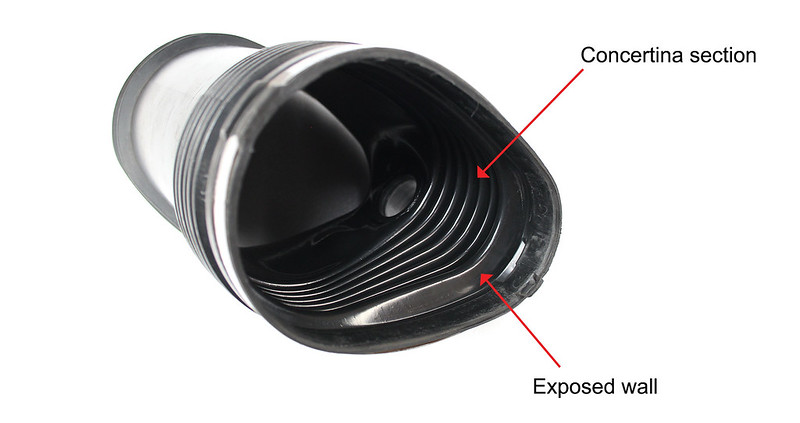 Another drawback of the stock tube is the large internal face at the stock filter connection. This exposed wall causes airflow to circulate as it enters the tube from the filter due to the sharp change in geometry from the rectangular filter opening to the more oval tube shape. 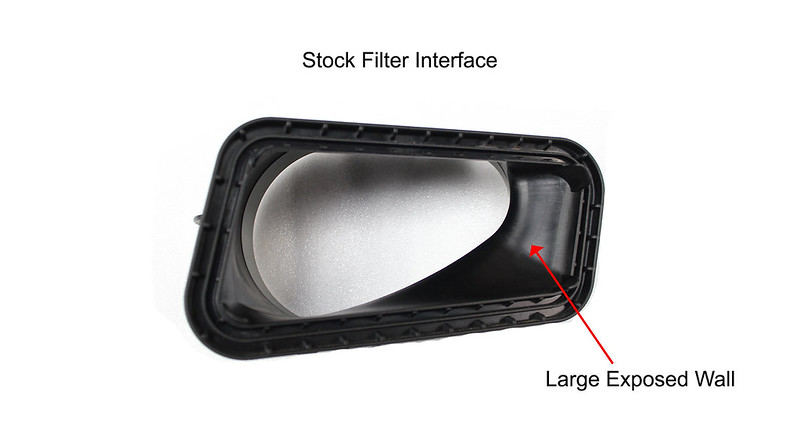 Now this can be compared with our tube design which has a much more gradual change in shape from a circular opening at the filter end to the oval opening at the inlet manifold end:

An important challenge to overcome was the requirement of movement with the engine. Instead of using silicon couplers with flexible sections (which would introduce similar interfaces as the stock tube), we designed the tube itself to be able to move with the engine. The tube has a compressible neoprene band around the section which interfaces with the stock airbox. This section seals the tube to the airbox yet allows movement in and out of the airbox as the engine moves. By allowing the tube itself to move - we have been able to create a flow path which is as smooth as possible. 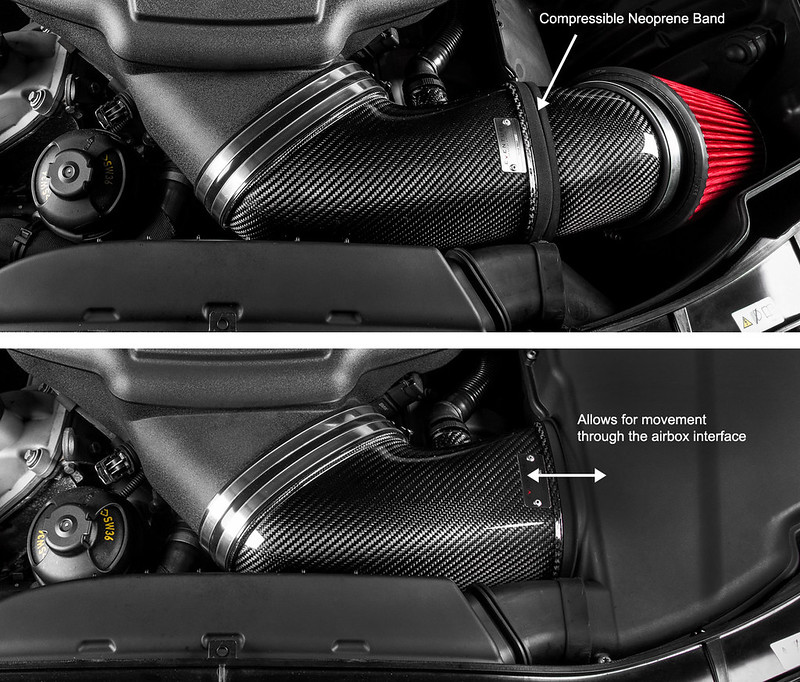 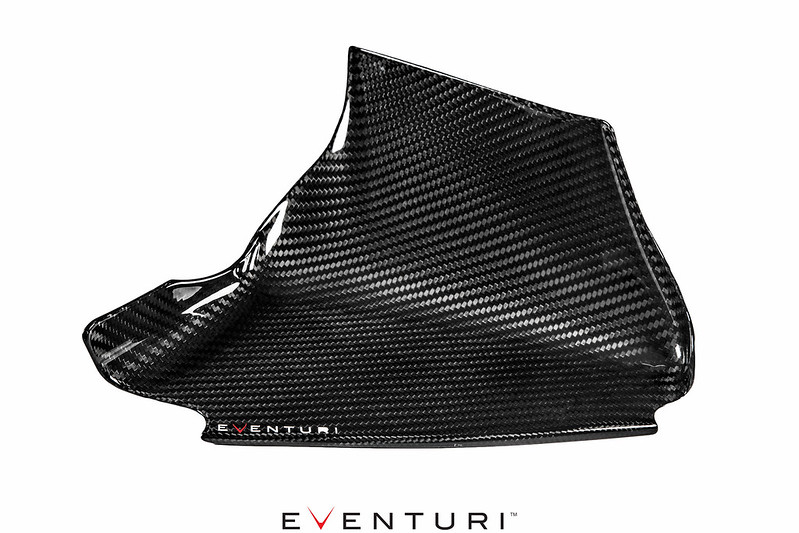 The E9X M3 airbox system is saturated with cold air from 2 feeds : a lower feed from underneath the headlamp and an upper feed from behind the kidney grills. The primary feed is the lower one from underneath the headlamp as it connects directly to the airbox with minimal change of direction and a large opening to the airbox. This is also a high pressure area of the car and airflow moves through the airbox from underneath to the exit at the top connecting to the exit vent in the bonnet. The other feed from behind the kidney grills which, although is a welcome addition, provides a much lower volume of air to the airbox than the lower feed. This is because airflow has to change direction through 90 degrees twice and also because the duct narrows down significantly before the entry to the airbox.

Looking at the lower duct more closely, it becomes clear that the duct has a large ridge which comes back on itself just before the opening to the airbox. This acts as a barrier which inhibits direct entry of airflow to the box by reducing the entry speed of the airflow. 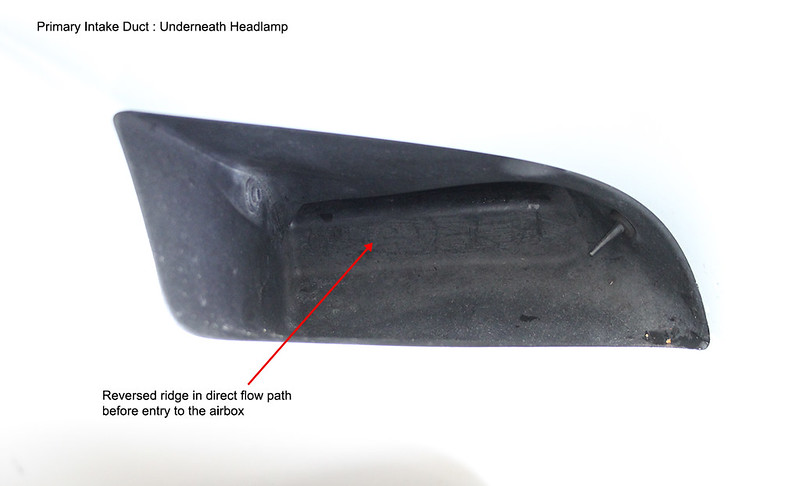 By designing a scoop to sit on top of the stock duct and curve up sooner to eliminate this ridge - airflow is now allowed to transition from the duct to the airbox without restriction. 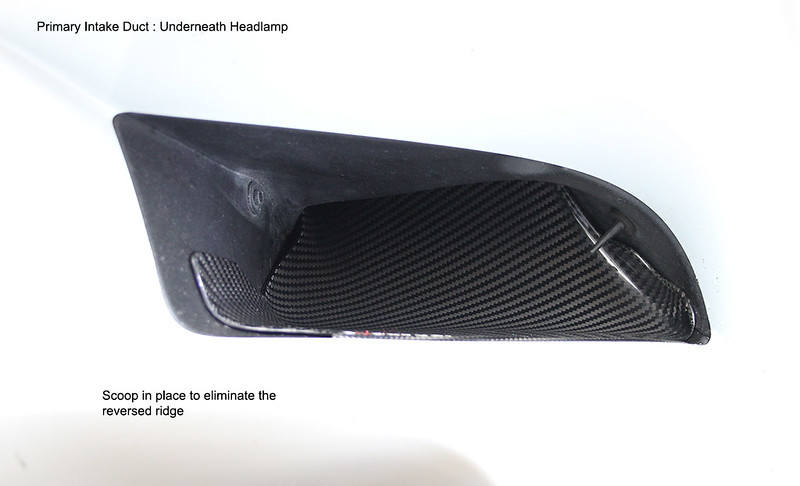 The airflow path is much smoother and as a result, the velocity of the air entering the airbox significantly increases. This allows the intake temperatures to be lower than without the scoop : we have data logged IATs road where we managed to reduce intake air temperature by 2 degrees using the scoop. To illustrate the effectiveness of the scoop, we devised a simple experiment with a leaf blower to generate flow and an air speed meter to measure the speed of the air entering the airbox. We secured the blower in one position so that it pushed air directly into the lower duct and placed the meter inside the airbox to measure the speed coming in. Results showed a significant increase in speed of almost 50% when using the scoop. The full testing video can be seen in the Video Tab.

The final component is a debris shield attached to the filter - this deflects debris and water from impacting the filter directly. With the increase of airflow entering the airbox with the scoop - this is an important addition. There is no negative impact on performance since the airflow is not impeded through the airbox - temperatures are still lower than stock. 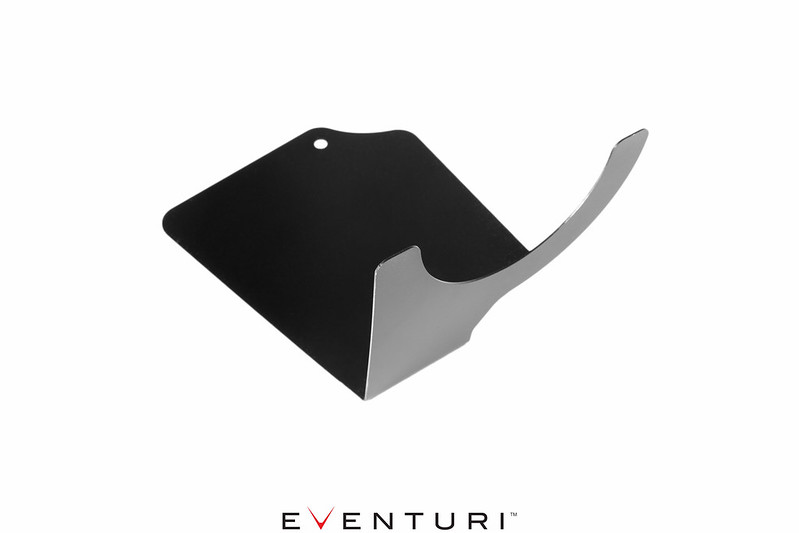 Sound clips with the stock system compared with the Eventuri intake and optional carbon airbox lid.