The S3 8Y intake is a complete redesign of the stock intake all the way to the turbo inlet. Taking cues from our RS3 intake, we have maximised usage of the available space to create an intake which can cater for all power levels from stock to high power builds with hybrid or full frame turbos. This intake system has been developed to offer the highest possible flow rate whilst maintaining the lowest intake temperatures possible. Each component has been designed to provide the turbo with a smooth and free flowing path. The restrictive stock 73mm diameter inlet tube is replaced with a larger 94mm diameter tube intake tube. The filter itself has an outer diameter of 192mm or 7.5″ with a filtration surface area of over 110,000mm^2. The patented Venturi housing has been designed to provide the maximum internal volume possible for the S3 engine bay space available and provides laminar flow to the turbo tube. Finally the duct seals the filter opening to the front slam panel but is not restricted by just the stock entry feed. We have lifted the front of the duct to now provide an extra opening behind the hood which is equivalent to an extra 7″ diameter hole for the intake to draw from. The resulting system can significantly outflow the stock airbox while keeping intake temperatures at a minimum with the sealed design.

The S3 8Y Eventuri system uses our Patented Carbon fiber Housings which provide an aerodynamically efficient airflow path from the filter to the turbo tubing. Not just another cone filter with a heat shield but a unique design which invokes the Venturi affect. You can read more about the housing design and how it works HERE

Our S3 8Y Intake has been independently tested on a MK8 Golf R by a reputable tuner in the UK, Regal Autosport. They tested a MK8 Golf R in stock form and also with a Tuning Box. Tests were done on the same day back to back with the stock airbox tested first and then the Eventuri fitted. No other changes were made to the car. The first graph shows the results using a stock map. As can be seen, there is a measurable gain throughout the RPM range of up to 12hp. This gain even on a stock car is noticeable on the road with better throttle response and quicker acceleration. The second graph shows results when using a tuning box which increases the flow demand from the intake system. The tuning box was used for both the stock airbox and the Eventuri intake without any changes between the tests. With a higher flow demand, the stock airbox presents a higher restriction to the turbo as can be seen by the significant gain achieved with the Eventuri fitted. We now have higher gains across the RPM range of up to 20hp and 30Nm, which is even more noticeable on the road. We expect gains to be even higher with higher states of tune. 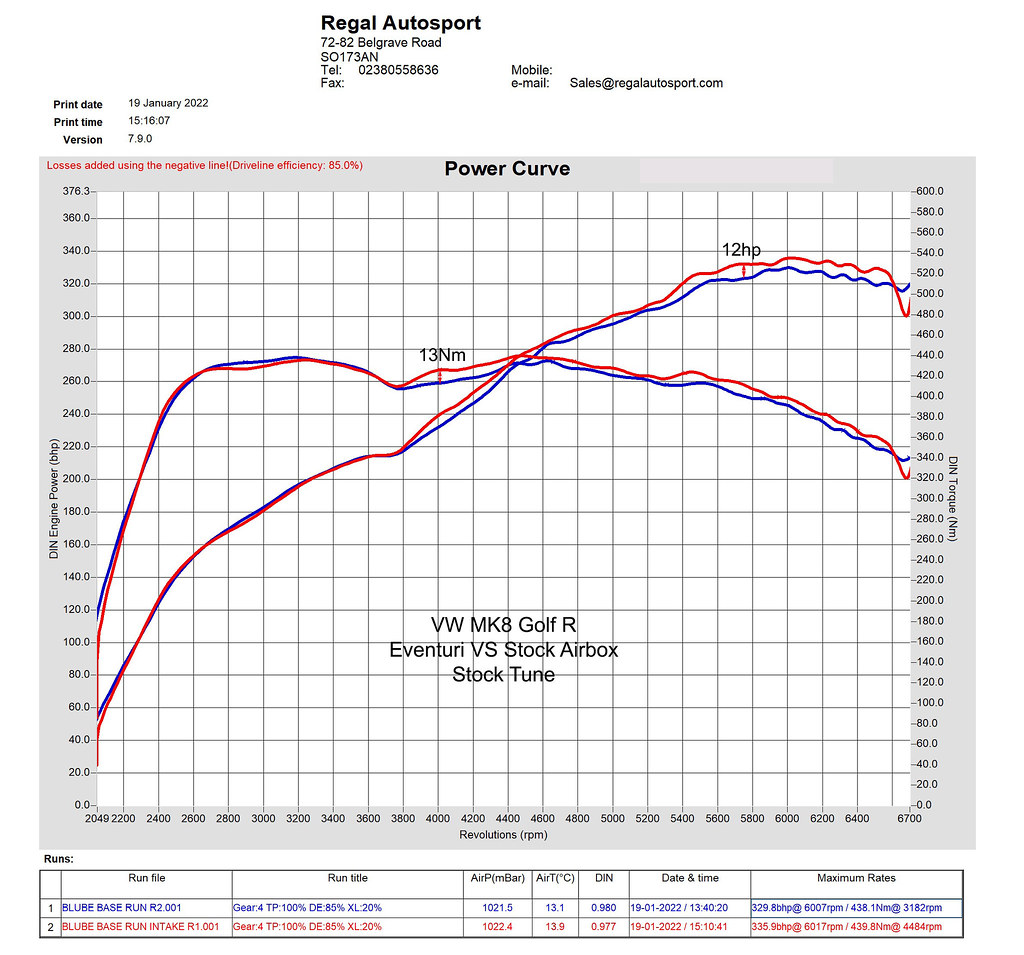 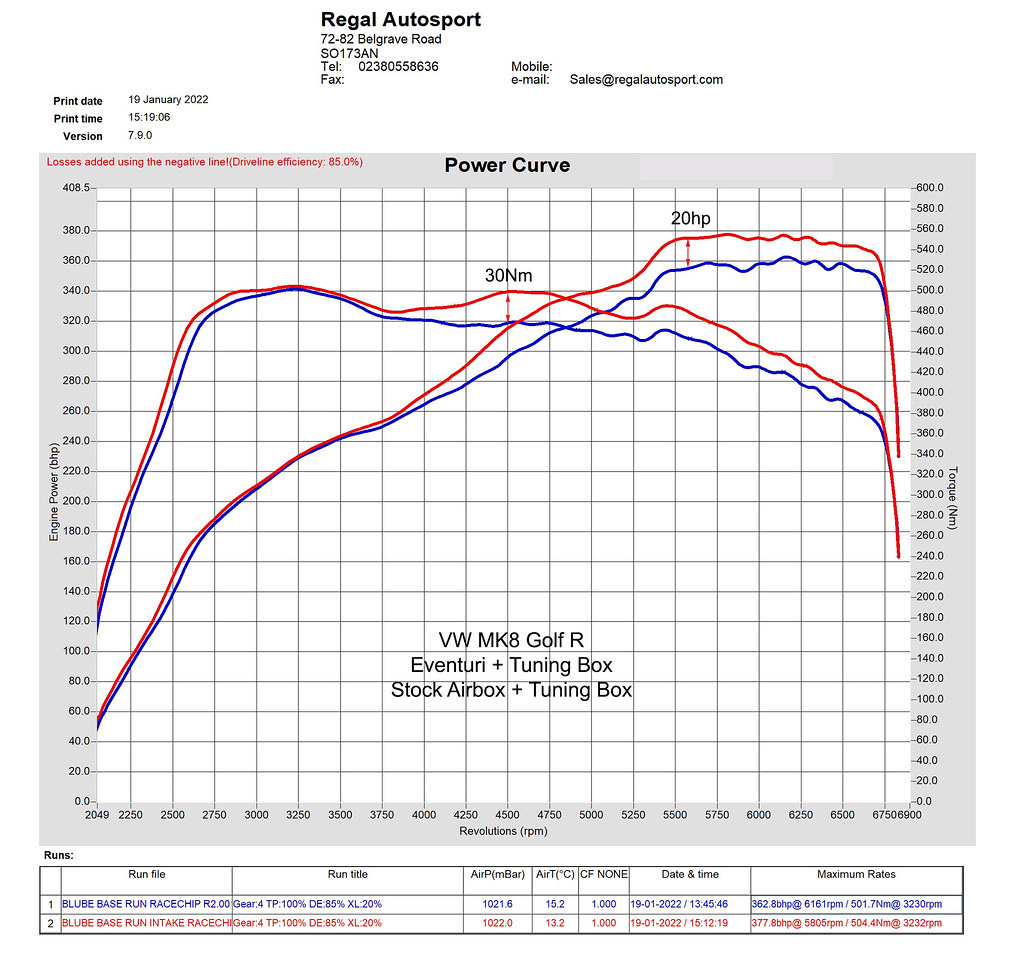 We conducted flow rate tests using a Superflow SF-1020 to measure the maximum flow rate possible at a pressure drop of 28” H2O. Tests were done on the same day in controlled conditions using the same test jig for each system. We tested our full intake system against the stock airbox system for both the R and GTi variants. The results show an increase of maximum flow by an additional 72% for the Golf R system. Importantly this has been achieved with a sealed intake system so the intake temperatures will also be maintained at a minimum. 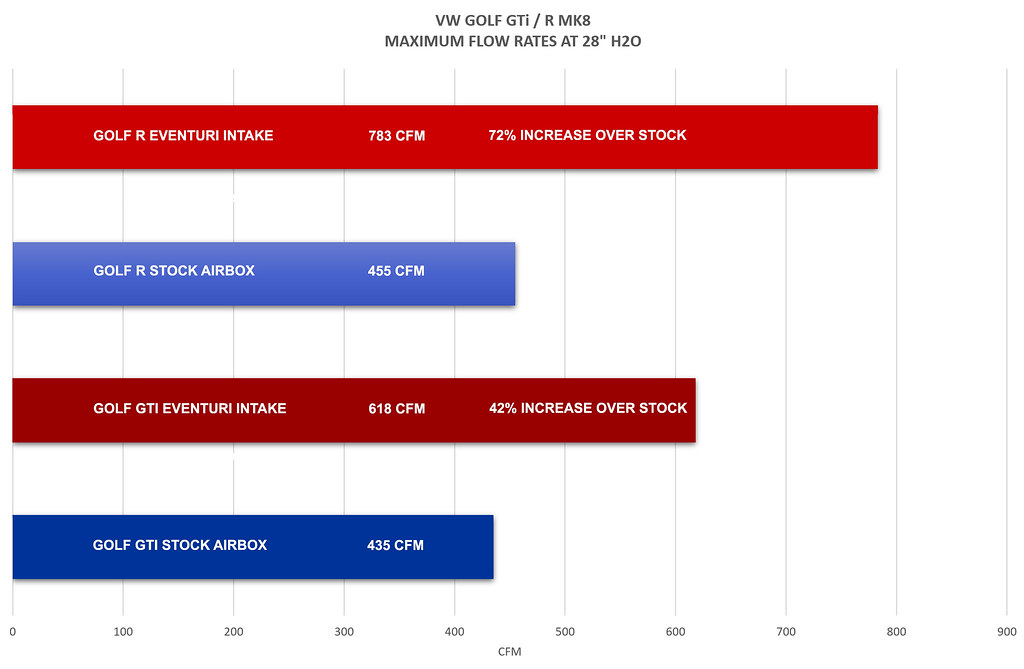 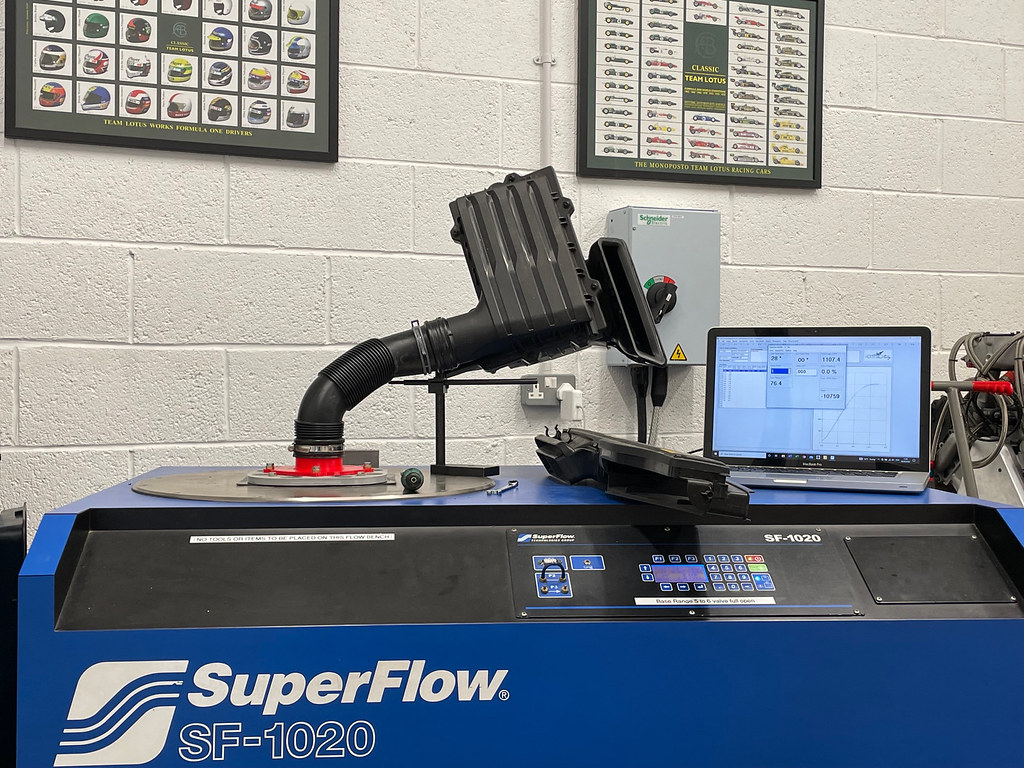 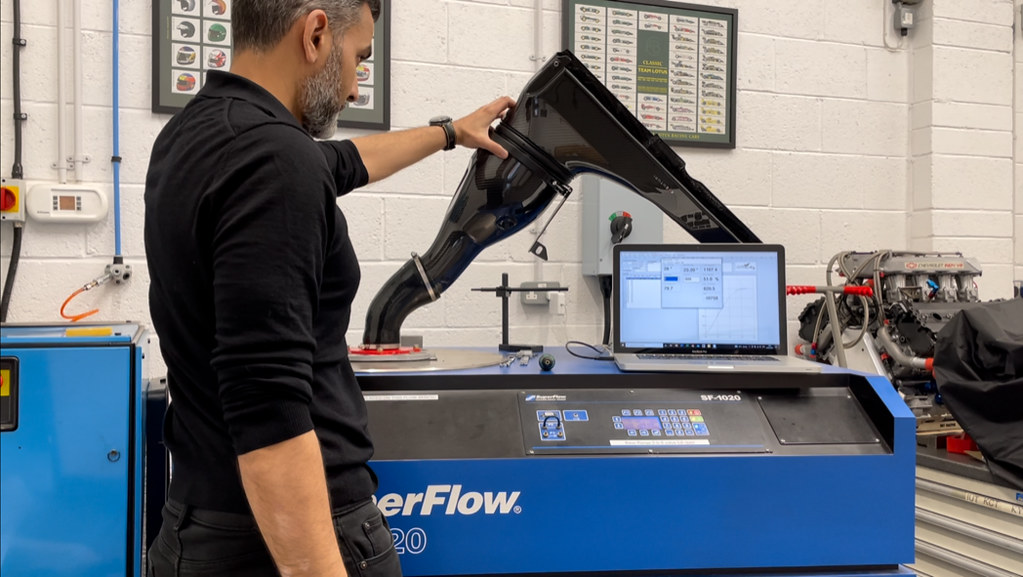 The gains are from a combination of reasons:

1) The sealed system keeps IATs low - the Audi engine bay can get heat soaked very quickly so an open cone filter will cause an increase in IAT values resulting in a loss of performance.

2) The Venturi housing provides a smooth transition from the filter to the intake tubes which are both matched to an internal diameter of 94mm. This helps the turbo to run more efficiently.

3) The entire system is constructed from pure pre-preg carbon fibre which is great at insulating from heat and has smooth internal surfaces as opposed to fibreglass which will have sharp resin lines present. 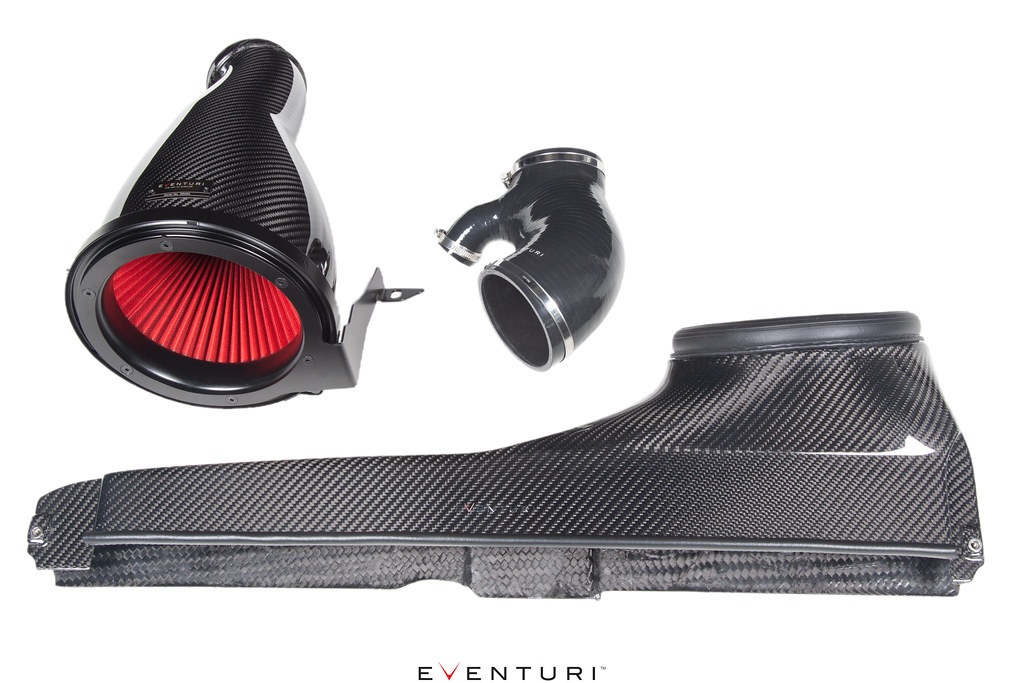 The image above shows the components for the S3 8Y system.

The Eventuri S3 8Y intake system consists of a number of components engineered to perform a specific purpose and fabricated to the highest of standards. We use 100% pre-preg carbon fiber with no fibreglass which means we can achieve a smooth internal surface to maintain smoother airflow. Here are the details for each component and the design ethos behind them: 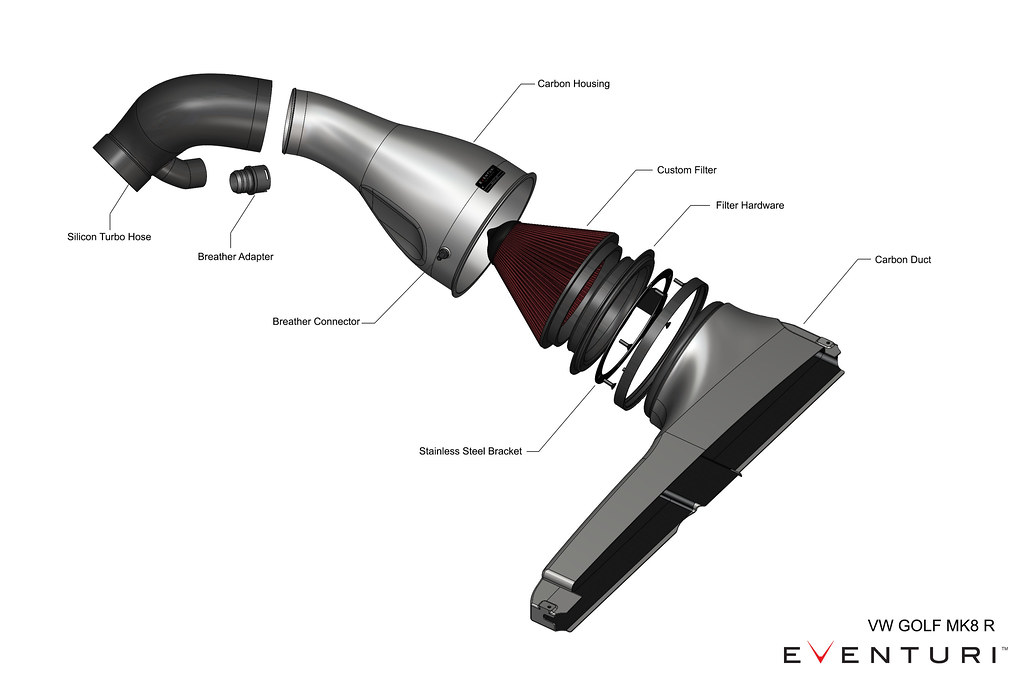 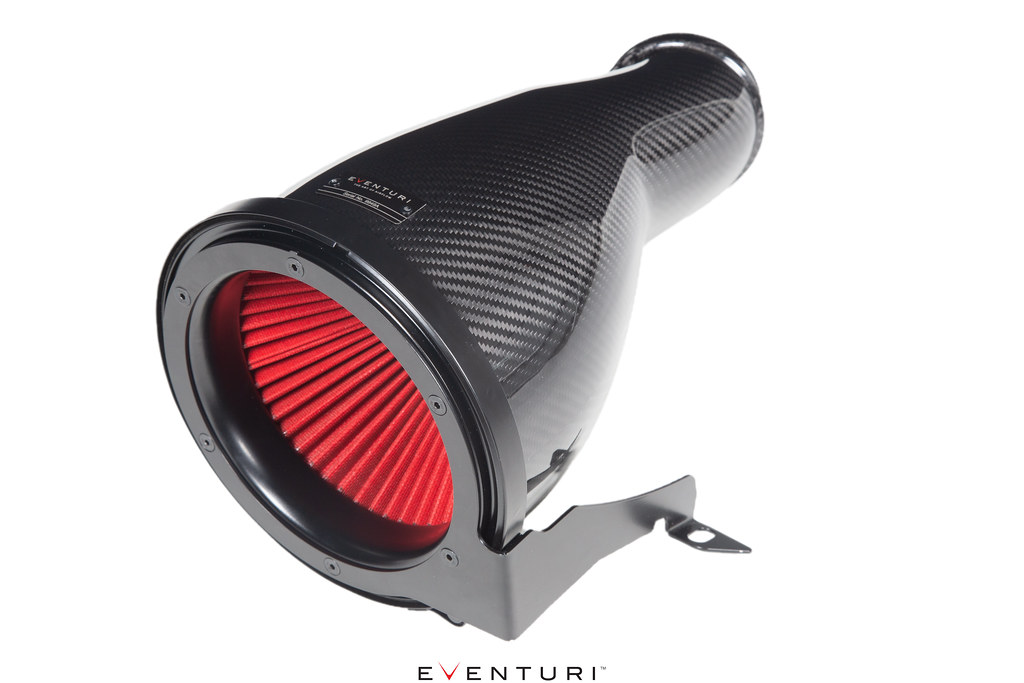 The S3 housing comprises of a bespoke high flow filter, aluminium cowl, laser cut bracket and the carbon pod itself. The carbon pod shrouds the reverse mounted filter and smoothly shape the airflow down to the intake tubes. This smooth reduction in cross sectional area invokes the Venturi effect where the airflow accelerates whilst maintaining laminar conditions. It can be thought of as a large velocity stack - below is a diagram to show the comparison between our patented design and a regular intake system. Further details can be read in the Technology page.

In order to achieve the highest flow rate possible we designed a new filter element to make as much use of the space available in the engine bay as possible. This new filter has an outside diameter of 192mm or 7.6" and when flow tested with a housing using a 4" opening is able to flow up to 900 CFM at 28" H2O. The filter medium is ISO tested to ensure that filtration is in line with OEM standards and is also dry. The filter is constructed with our signature flow cones to aid in the Venturi housing principle. 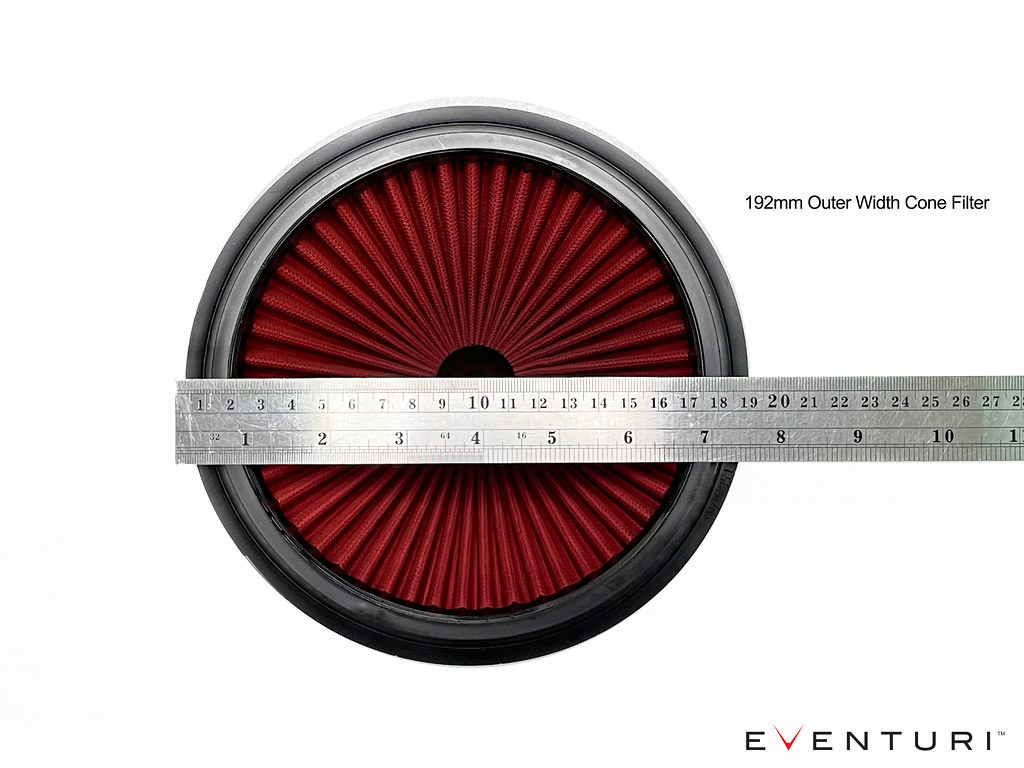 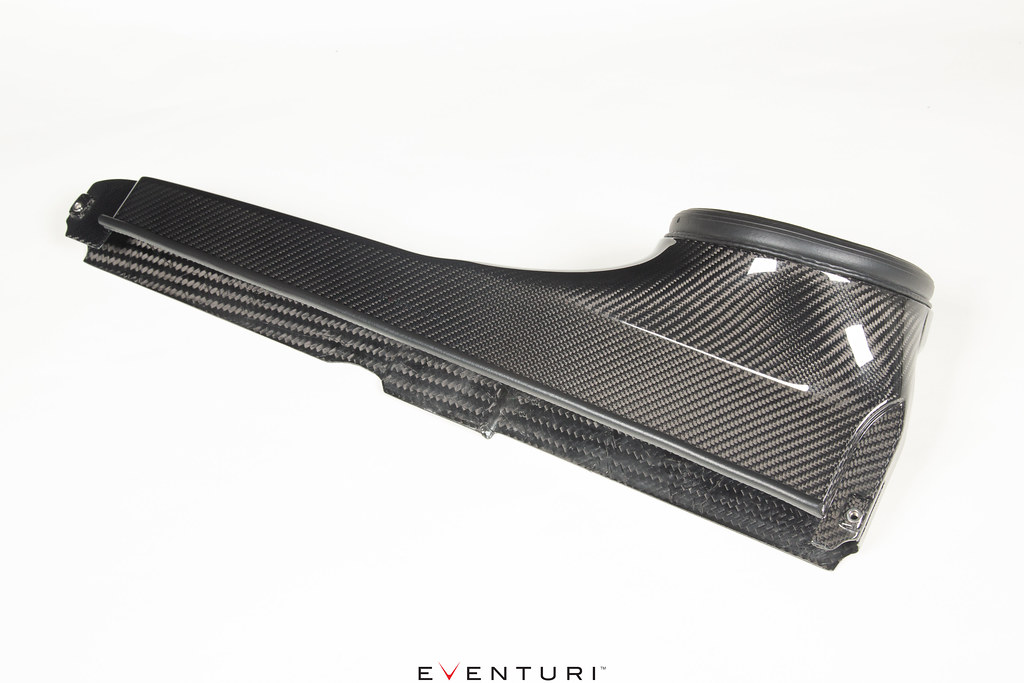 The duct channels ambient air from the slam panel area to the filter housing. It fits inside the OEM slam panel area and smoothly transitions to the circular filter housing shape. In order to ensure a good seal against engine bay heat - it also has a flexible rubber edging around the opening which presses against the filter housings creating the desired seal yet allowing the housing to move with the engine. Since this was designed to support high power builds, we found that the stock openings in the slam panel could cause a restriction at high flow demand. So we lifted the top surface of the duct and created an opening above the slam panel which is able to draw in cold air from behind the hood shut. This extra opening is equivalent to a hole with a diameter of over 7" and completely de-restricts the stock cold air feed. The duct was designed to have the maximum internal volume possible within the given geometry of the engine bay. This ensures that the filter housing is able to draw with minimum restriction. 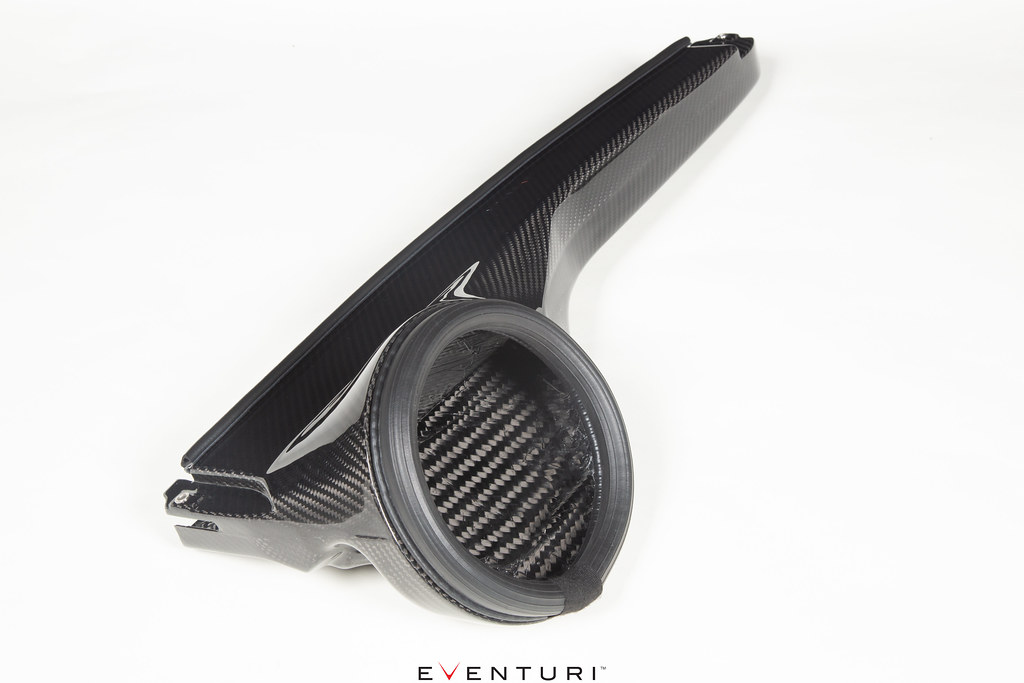 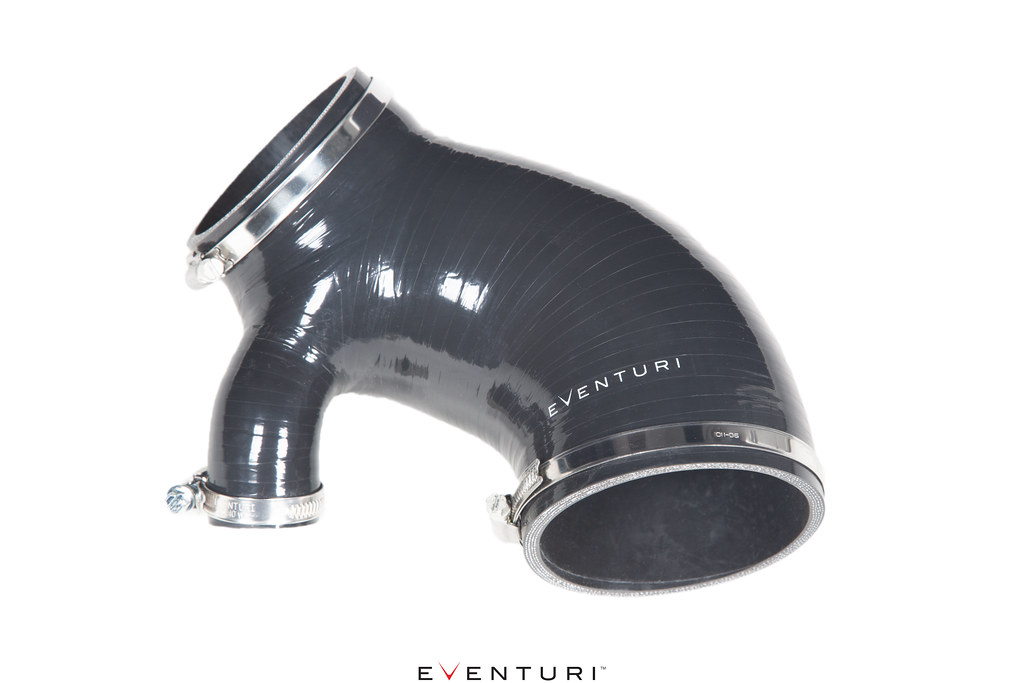 Our silicon hose replaces the stock flexible tube to the turbo inlet. This has been made to match the outlet diameter on our filter housing at 94mm which is significantly larger than the stock tube at 73mm diameter. This represents an increase in cross sectional area of over 60%. The silicon hose retains this diameter as far as possible and then smoothly tapers downs to the stock turbo inlet.

The complete system comes together to provide an intake which improves on the stock airbox in performance, aesthetics and sound......... 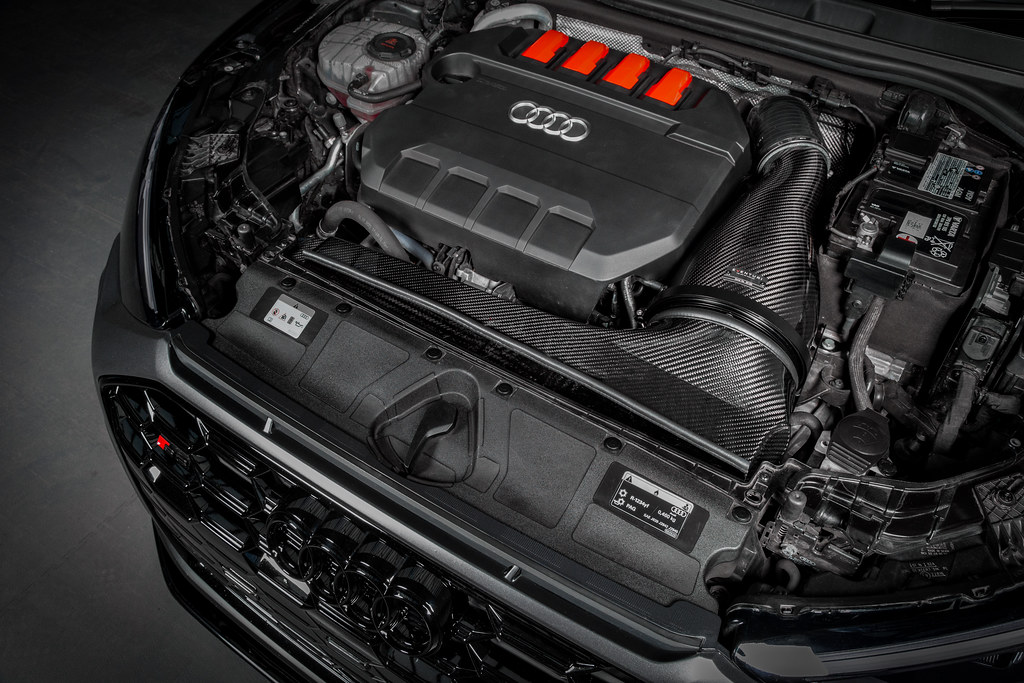 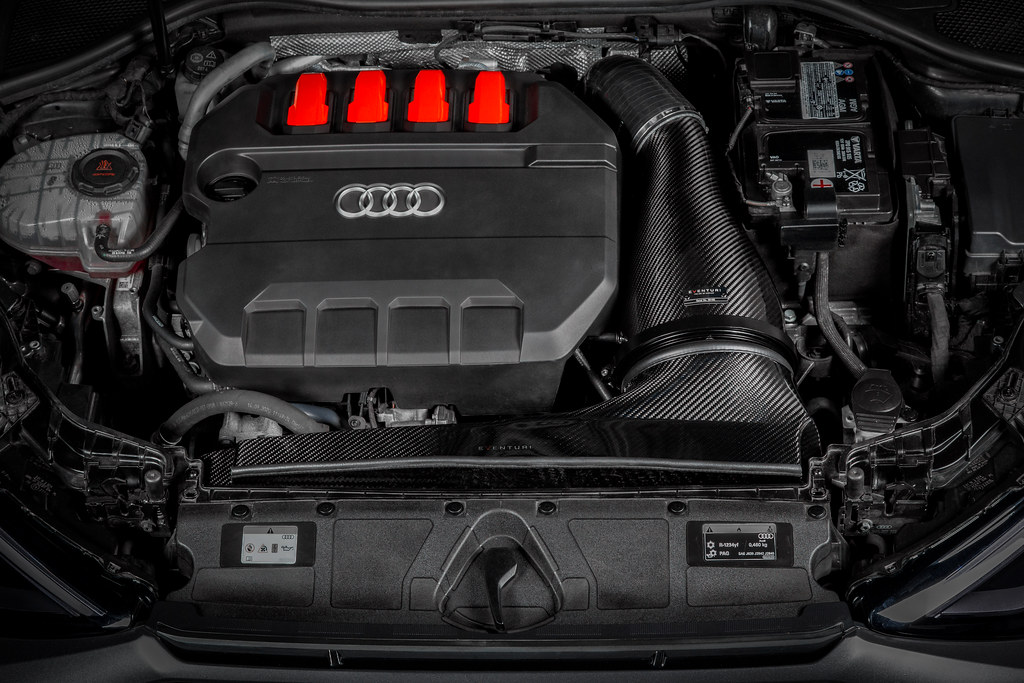 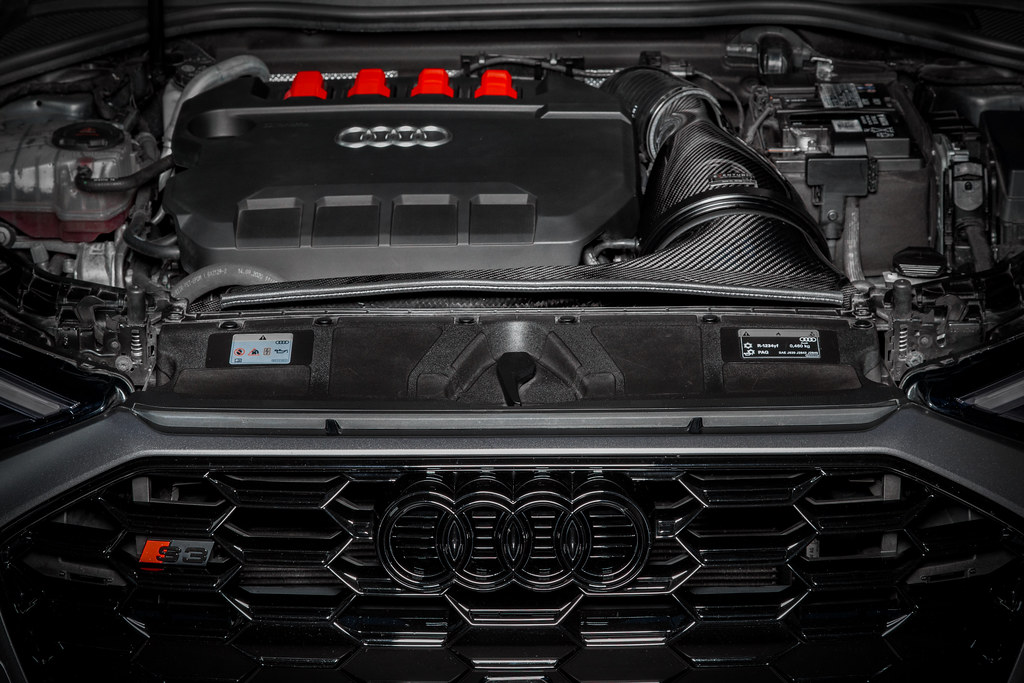