The Audi C7 RS6/RS7 Eventuri intake sets a new benchmark for intake design on this platform. It was developed to achieve two objectives – 1) De-restrict the turbo inlet paths. 2) Maintain low inlet temperatures. The first objective was met by providing each turbo with a separate filter and Venturi stack in order to reduce drag and allow the turbos to work more efficiently. The second objective was met by enclosing the filters inside a carbon airbox and feeding them with an additional scoop added behind the front grill. The C7 RS6/RS7 engine bay has multiple heat sources from different directions so a simple configuration of open filters and shields would result in higher IAT values. Our carbon airbox enclosure has been designed to maximise the use of the available volume and block all sources of heat. The resulting performance gains and aesthetics are industry leading for the C7 RS6/RS7.

The C7 RS6/RS7 Eventuri system uses 2 Venturi stacks mounted to the filters which smoothly transition to the turbo tubes. These provide an aerodynamically efficient airflow path from the filters to the turbos. Not just another cone filter with a heat shield but a unique design which invokes the Venturi affect and allows laminar flow to be maintained throughout the tubing, reducing the drag on the turbos.

Categories:
Audi, Intake Systems
FIND A DEALER
Extensive testing was carried out on this system both on the Dyno and road. Firstly the dyno tests were carried out showing an impressive gain of approximately 19hp and 17ft-lb of torque. This translates on the road to increased part throttle and full throttle response with the car pulling much more eagerly to the redline. The testing was done on the same day back-to-back and temperatures were monitored to ensure consistency. The car was tested firstly with the stock intake - hood closed. We then left the car on the dyno and installed the Eventuri. The car was then run again - hood closed. Several runs were carried out with both configurations to get a consistent result.

We then took the car for some road testing using a Vbox unit to record the acceleration from 60-130mph (also 100-200Km/h). Testing was carried out on the same stretch of road - again on the same day to keep variables minimum. Results show that with just the intake added, the acceleration times from 60-130mph and also 100-200Km/h reduced by 0.4 seconds which is a significant change at such speeds. 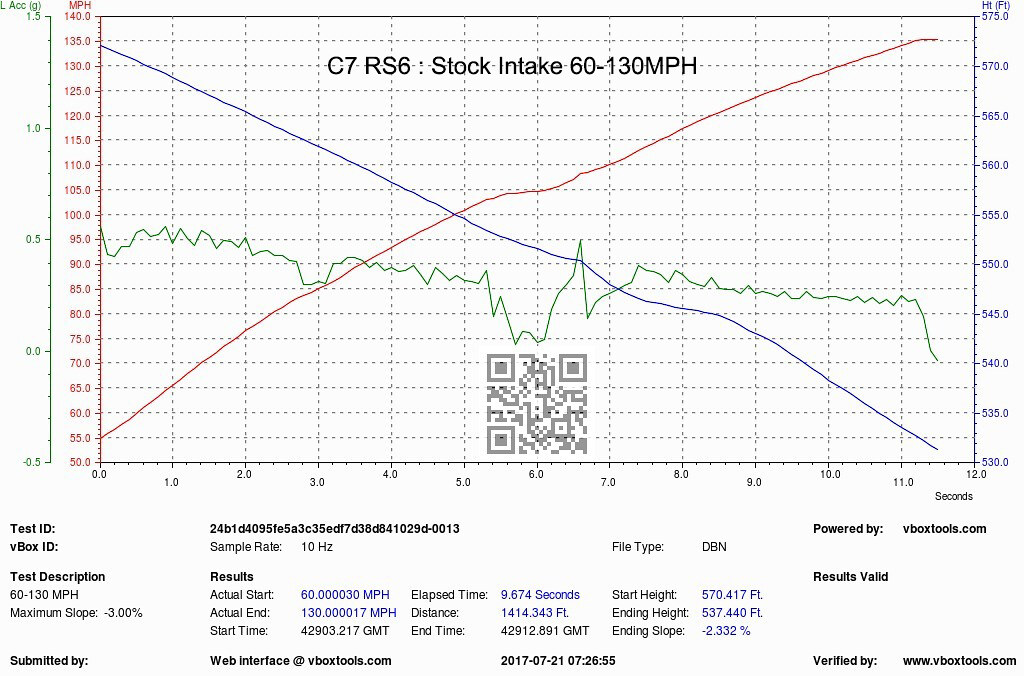 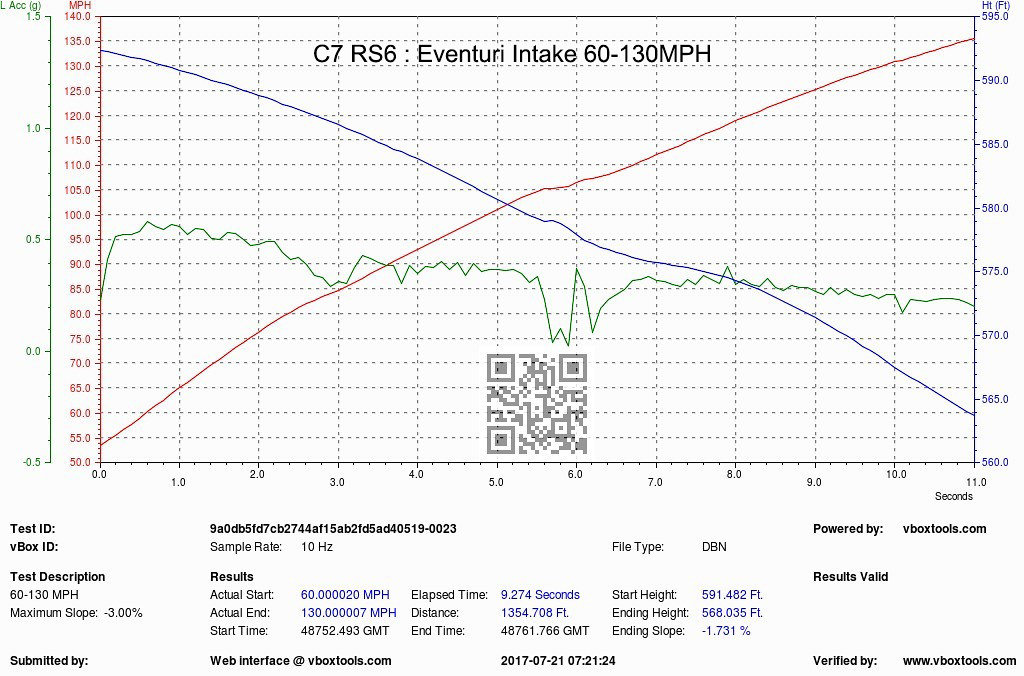 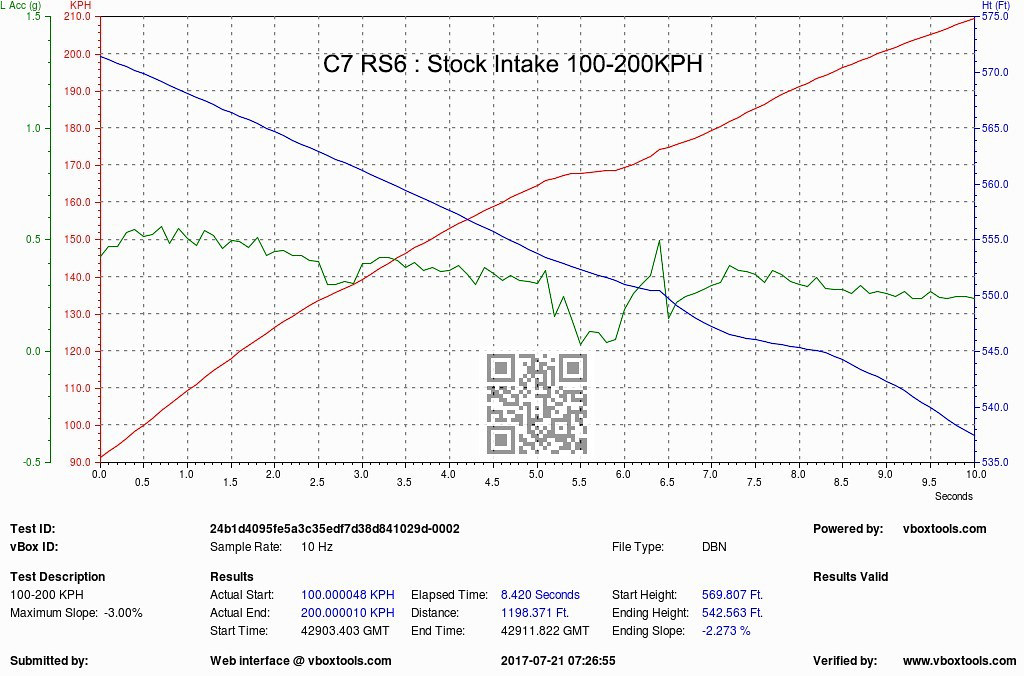 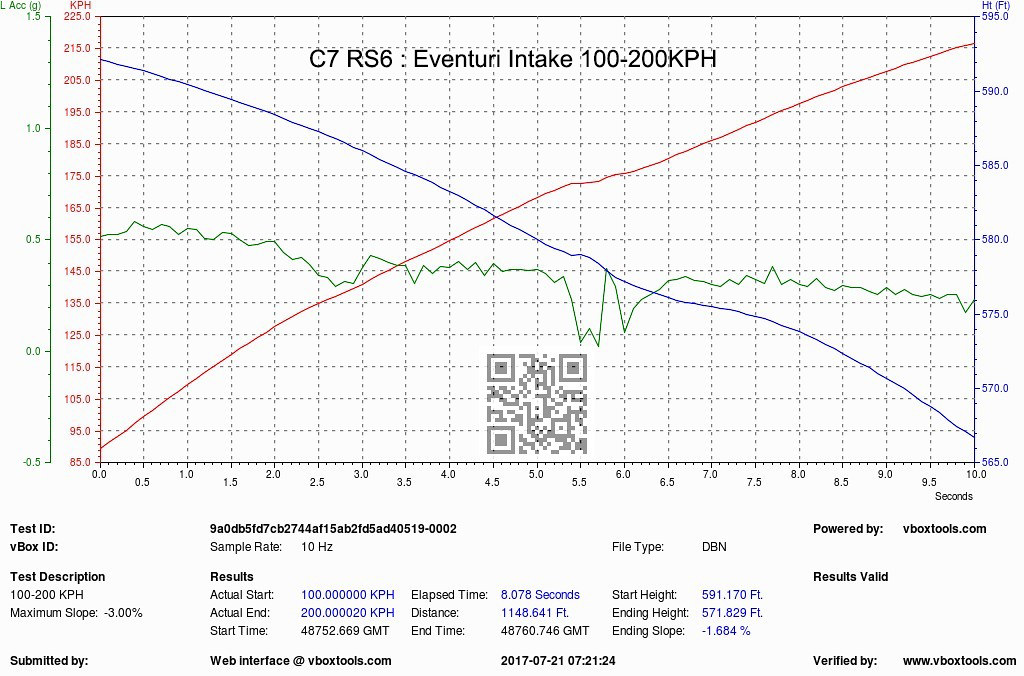 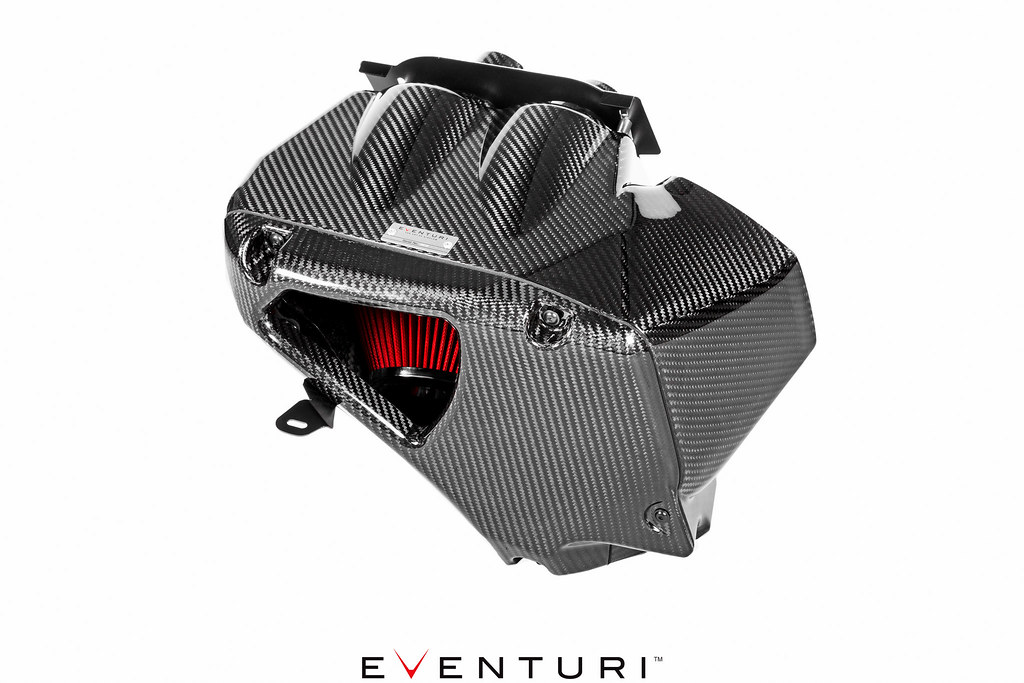 The Eventuri C7 RS6/RS7 intake system consists of a number of components engineered to perform a specific purpose and fabricated to the highest of standards. Here are the details for each component and the design ethos behind them:

The enclosure has been designed to make the most effective use of the volume given when removing the OEM airbox. It shields the filters from the multiple sources of heat in the engine bay. The most obvious source is the engine/turbo setup itself, however there is also a heat exchanger under the headlamp which also emits significant heat. Furthermore, when the radiator fan is operating, a stream of hot air is pushed into the intake area from the radiator side just under the duct. All these heat sources require a complete airbox system as shielding - a simple cone and heat shield just cannot do the same job. During development we tested 2 open filters with heat shielding and the inlet temperatures increased significantly causing a loss of power. The airbox prevents these heat sources from adversely affecting the cone filters and is connected to the carbon duct which feeds the enclosure with cold air. 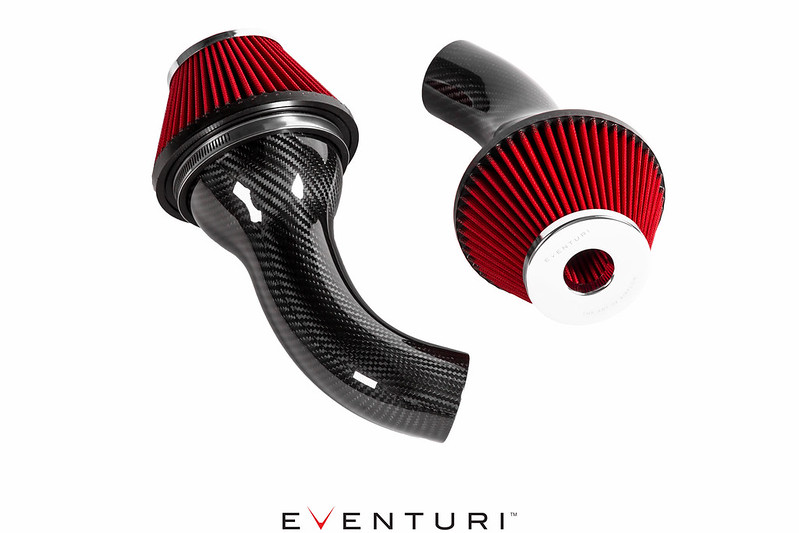 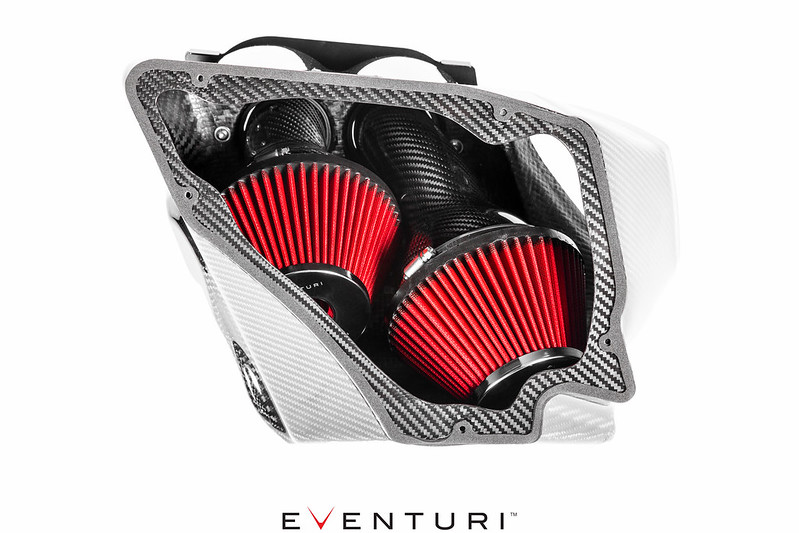 To connect our doubled coned filters to the stock turbo pipes, we designed a pair of tubes with smooth curves and with an innovative Venturi stack matched to the inner diameter of the filter neck. This curvature allows the airflow to remain laminar as it goes through the filter and enters the tubing - which is important as higher rpm where the turbos are pulling in air at high velocity. The tubing design results in an aerodynamically efficient flow path from the filters to the turbos allowing the turbos to generate boost more effectively and reducing lag. On the road this is noticeable with the car having a sharper and more eager throttle response as boost is generated quicker. 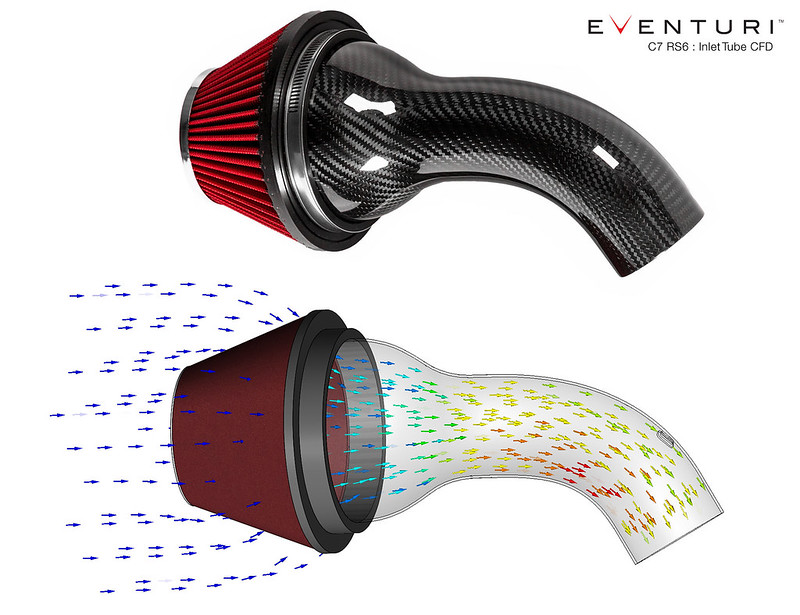 A complete flow simulation model of the airbox shows the saturation of flow from the 2 openings of the airbox whilst remaining steady. It also shows both tubes feeding the turbos with laminar flow as expected from the Venturi concept. 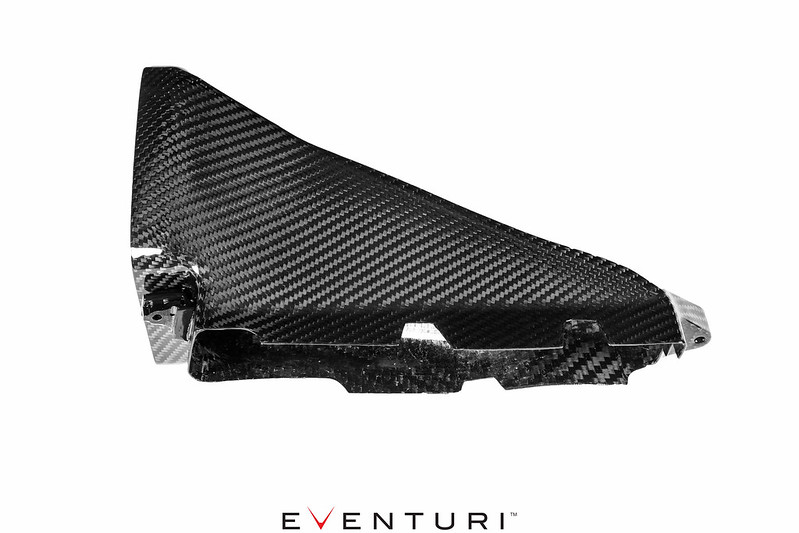 We redesigned the inlet duct to have a larger internal volume than the stock version. This duct feeds the airbox enclosure with ambient air from the front grill to ensure inlet temperatures are kept as low as possible. 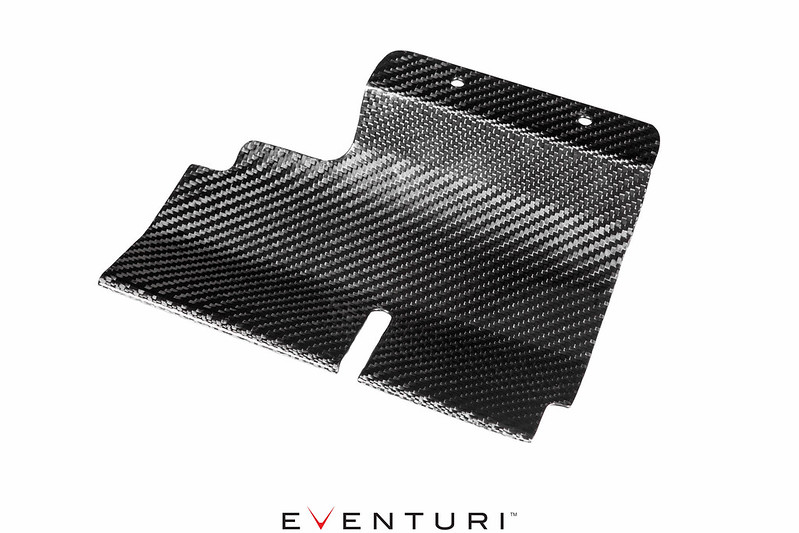 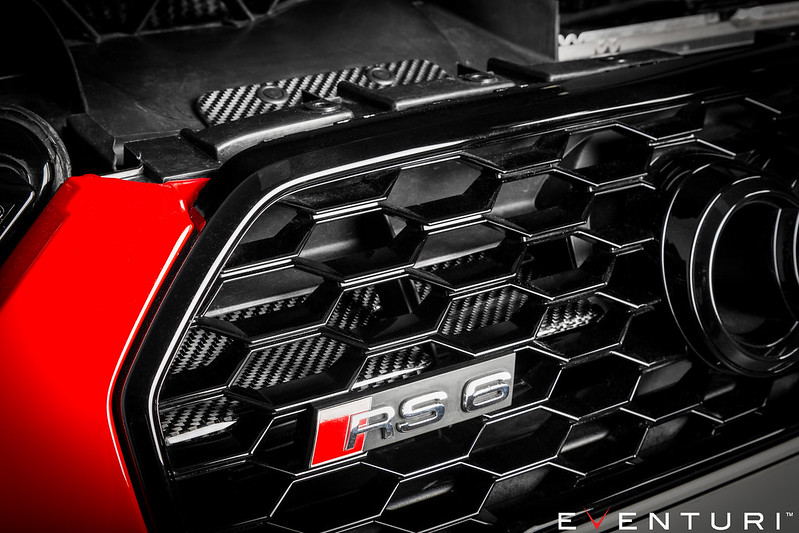 The Air scoop sits behind the front grill and forces ambient air into the duct - the curved nature of the scoop ensures that the airflow is guided as efficiently as possible while the vehicle is in motion. This allows the temperature inside the airbox enclosure to drop rapidly after the car has been at a standstill and heat soaking. 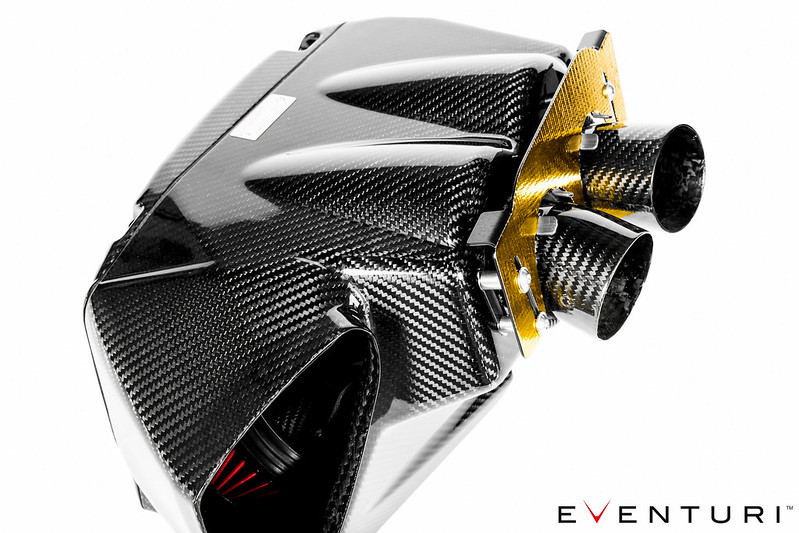 The final piece of this system is a laser cut shield with gold heat reflective to protect the face of the airbox enclosure from the direct heat of the turbos. The face of the airbox is in direct line with the top of the engine where the turbos are situated, once the engine is up to operating temperature and under load, a significant amount of heat is generated by the turbos. This heat can quickly soak the airbox so the shield ensures a thermal barrier between the turbos and airbox to maintain low inlet temperatures. A thermal imaging video was taken after several dyno runs (with the hood closed) to show the temperature difference between the hot side of the engine and the carbon enclosure: